Overlooking the history of Latvia and its experience with refugees, immigration and emigration questions there are several processes in history that construct a diverse context in which to rethink these issues now. First, Latvia’s population historically has been multi-ethnic for centuries including such ethnic groups as Russians, Ukrainians, Poles, Lithuanians, Jews, Romani people and Germans among others. Through different periods they have interacted with Latvian population and now construct a significant part of the social and cultural life. An important experience in the recent past that illuminates the refugee issue is the WWII when Latvia became subject to violent political repressions and was incorporated in Soviet Union. For this reason, around 200 thousand of Latvians went on exile, which could serve as a historical point of reference for understanding the situation of the current refugees coming from the countries of war. With the USSR Red Army approaching the eastern border of Latvia in the summer of 1944, an extensive refugee flow of Latvian population started westwards. People ran from the likely repressions and ended up in the camps of displaced people in Germany. Over the next years they would be sent further on all over the world, creating communities of Latvians in exile in places like Canada, US, Australia, etc.

During the Soviet occupation Russians became the largest ethnic minority in Latvia. Number has decreased in size after Latvia regained independence in 1991, but nevertheless Russian community in Latvia forms about 30 % of the population. Regardless sometimes politicized relationship between both countries and communities, the co-habitation with the Russian community has been relatively calm showing an example of potential understanding and integration within the society. On the other hand, Latvia and Estonia are the only European countries which still hold to the so-called Alien`s passport, which is a person’s identity document issued to the non-citizens of the Republic of Latvia. That is a passport many ethnic Russians hold in Latvia, being able to use it as an identity document for travel, having much more limited accessibility to places without visa and not being able to use it for voting in the general elections. This Alien’s passport sharply represents the painful and entangled past of the country and the impossibility to come to terms with it on a governmental level. It has created loads of discontent in the Russian part of the population being misrepresented in the Latvian media, and the other way around when any reaction appears from the people or the government. The Latvian information space is primarily divided in two parts – Latvian and Russian. Furthermore, Russian media space is divided into “Russian media located in Latvia” and “Russian media located in Russia” which is clearly dividing the society, since one part of the society is not informed by the other’s news and they can be radically different not only in the interpretation, but also in the content itself. While a further work should be done towards reconciling and working towards this issue, since Latvia is part of the European Union, it is obviously facing processes of new immigration. Almost naturally following its own population going abroad in search of better jobs in Ireland, England among many other countries, as well as going for education and often staying in the places. Those processes together with the aging population actually make Latvia a shrinking population demographically.

Until now the country has had very little experience in immigration from countries with a more distinctive ethnic, cultural and religious background. The tendency of recent years shows that there has been an increasing demand for asylum, but Latvia is mostly a transit country for refugees, since they usually decide to move to a different country with better economic situation once their status is obtained. There is also not a very strong infrastructure for integration and policies in place, since the demand has been so little. This little experience of receiving refugees and Latvia’s agreement to participate in the EU agreement where we have officially agreed to accept 776 refugees, has created a fear in society giving way to the rise of racism, nationalism, political populism and xenophobia. Meanwhile the local NGOs organize informal meetings with refugees, public discussions to overcome the stereotypes about the “other cultures” paving way to more discussions and projects to be done to shift the predominant climate of fear.

To broaden the scope of possible ways to talk about the migration in the context of Latvia, the exhibition within the “Shared History” project in Riga is to be developed at the art museum “Riga Bourse”. It will be focussing on the idea of the territory of Latvia as a historically layered and multi-ethnic zone where different cultures have co-existed since centuries. The use of both the collection and contemporary artworks is supposed to reveal the potential the museum can hold in those kinds of discussions. 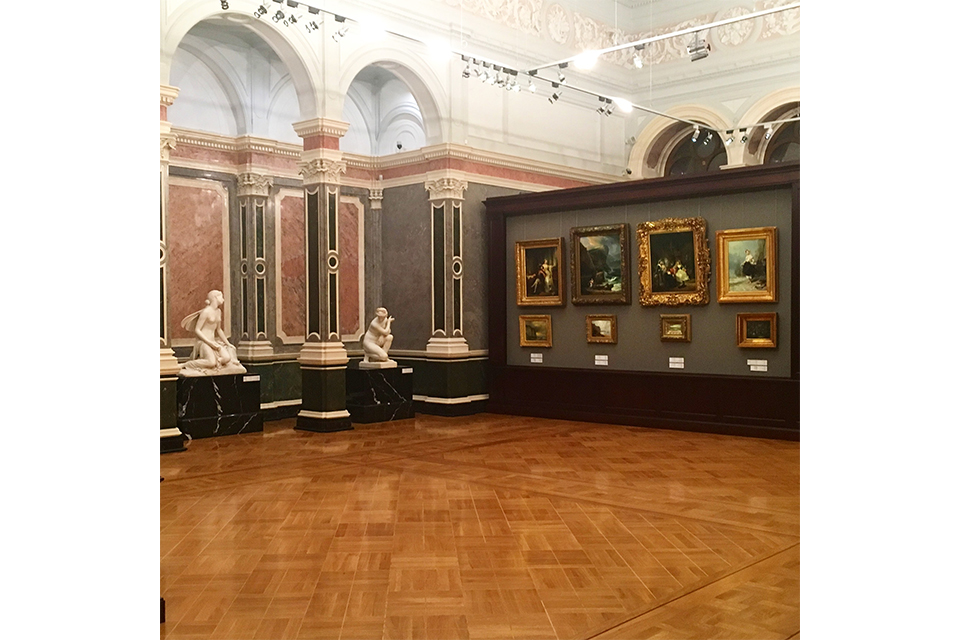 The Art Museum “Riga Bourse” is a symbolic starting point for the exhibition, its collection is based on the collections of former Riga city elders, merchants and burgomasters that mainly date back to the end of the 18th century and especially the 19th century. The Western and Oriental galleries of the museum comprise paintings, graphic arts, sculptures and applied arts of explicitly non-Latvian origin. The collection of Latvian art is in its turn exhibited at the Latvian National Museum of Art.

Following the division, the during the Soviet time, the museum used to be called the “The Museum of Foreign Art”, until its name was changed in 2011 towards a more neutral “Riga Bourse”. The museum holds around thousand paintings from various Western European countries representing the major schools, however, mainly focussing on the Dutch art from the 17th century and on German art from the 19th century. The museum’s collection of applied arts on the contrary includes a greater variety – among more than seven thousand objects applied art from Ancient Egypt, Greece and Rome and other western European countries finds itself next to objects from Asia and the Far East. The division of the collection in the Western and Oriental galleries within the museum which takes place physically by locating them in two different floors poses a lot of unanswered questions about the classification of the art object today. Can a more integrated approach be created through mixing the objects in the floors, shelves and rooms? Can the interventions by curators and contemporary artists on a regular basis help to shift the narrative of division towards one of shared history? Shared by whom and how?

This museum is a place regularly attended by a diverse local and international audience, sometimes hardly reachable for contemporary art events, opening any kind of intervention to an automatically larger group of people. Thus as the main aim of the “Shared history” project in Riga is to prepare society and change the mindset of the people in regards to the migration, the museum holds a potential to become an essential discursive space.