What is a refugee?

Consulting an older dictionary is an excellent way of putting into perspective many of the contemporary issues we are dealing with. There is a constancy in such works. They cannot be updated at will. They also provide some perspective on time. This was how the word flykting (refugee) was defined in 1986.

The abbreviation ibl. means that is a partial synonym, that is, not a full synonym. Here we can see that the word invandrare (immigrant) is a partial synonym. Flykting (refugee) means flyende (fugitive). English synonyms for ‘fugitive’ are ‘escapee’, ‘escaper’, ‘runaway’, ‘deserter’, ‘refugee’, ‘renegade’ or ‘absconder’. Several of these words can be directly translated into Swedish. Thus, ‘fugitive’ means ‘escapee’, someone who is fleeing. A ‘refugee’ is a displaced person, according to the English explanation.

Fleeing is fleeing from danger, from a threat against oneself. Fleeing means being in transit, moving away from the threat. In English, this comes across well as that the language first indicates the actual movement – ‘fugitive’, ‘escapee’ – and then when the escape comes to an end, ‘refugee’. In Swedish, however, the refugee continues to flee even after the person has ceased moving and escaped the threat that provoked the flight. Thus, we realise that what we have here are two different conditions, one of which is about movement and the other about being displaced. This is clear in English. Here, the person is displaced after the flight. In Swedish, the person will always be a refugee who is always fleeing from something even if he or she has escaped the threat.

Having said this, we may wonder how a person who has been forced to flee can be displaced, if the place in which the person has ended up is a safe place. In Swedish, this becomes even more complicated. Here, the person is always a refugee, that is, someone who is fleeing, even though the person finds him- or herself in a safe place.

To be moving, as a refugee or an escapee, is one thing, but that someone who has been forced to flee should be in the wrong place – be displaced – or be regarded as a person who is constantly fleeing cannot be a sensible way of looking at the matter.

Firstly, the person is in the right place, because the threat has been removed and the flight has come to an end. Secondly, these terms imply that the person will always remain on the outside, the person will be branded as displaced, or as a refugee who is fleeing and who has not found peace. A flight is one event among many in the life of a person, an unpleasant experience to be sure but not of the dignity that it should be his or her defining characteristic. The person may also be a father or a mother, a son or a daughter, old or young, have one or several professions, speak various languages, harbour a multitude of experiences; in other words: a human being for whom the flight was an experience among many, albeit the worst one.

On the Swedish Parliament’s website one can search for the word flykting (refugee) under the heading “Dokument och lagar” (Documents and Laws). I have searched for documents from the period 1920 to 2017. My search in March 2018 yielded 11,363 hits. The image shows that the sum total changes as new documents are added. When I organised the hits in ten-year periods I arrived at the following list:

Remarkably, there are no documents from 1931 to 1951. There is no mention of the Baltic refugees, who fled the Second World War and then the Soviet occupation. Why there is no mention of them I do not know. Even if we include double counting, in, for example, the years 1980/1981, the pattern is clear. The members of parliament have paid attention to the word flykting (refugee) to an ever increasing extent. This attention is related to a changed attitude towards immigration. 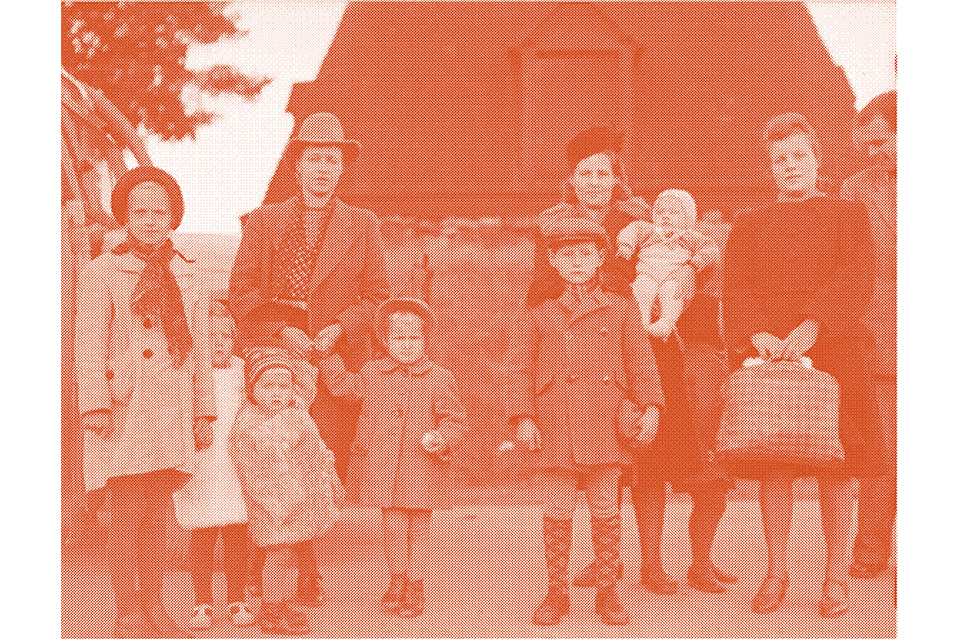 The Swedish Migration Agency explains that it was refugees from Germany and the Baltic countries who, during and after the Second World War, transformed Sweden from an emigration country to an immigration country. In the 1950s and the 1960s, so-called labour immigration to Sweden increased from countries such as Italy, Greece, the former Yugoslavia and Turkey. Labour immigration was essential for Swedish industry that was working at full capacity, as a result of the rebuilding of war-torn Europe, among other things. Sometimes the immigration was organised by the Swedish employment agencies, the Swedish Migration Agency explains, but the majority of the immigrants made their way here on their own initiative.

The first group of refugees came from the Baltic countries and Germany during the Second World War. Then it took until the 1970s until Sweden began receiving refugees again. According to the Swedish Migration Agency, the decade with most asylum seekers was the 1980s. This is when political protests against immigration gained in strength, which, in 1991, led to the formation of the New Democracy party that was represented in parliament from 1991 to 1994.

The concept of asyl, ‘asylum’, is interesting. If we return to my dictionary of synonyms we find that it can mean many things, such as ‘home for the defenceless’, ‘orphanage’, ‘nursing home’, ‘old people’s home’, ‘charitable institution’, etc, as well as ‘sanctuary’ and ‘shelter’. The English equivalent, ‘asylum’, means both ‘refuge’ (‘shelter’, ‘safe keeping’) and ‘mental hospital’. There is no need to comment on the connections between the meanings. We can discern a kind of transition from being on the move to being more stationary, still, however, within the framework of charity, sanctuary, shelter, a place where asylum still encompasses displacement, but, perhaps, no longer being classified as a refugee but as an asylum seeker.

Under the heading “1990s – Ethnic Cleansing in the Balkans”, the Swedish Migration Agency writes that “In Sweden, a little over 100,000 people from former Yugoslavia, mainly Bosnians, found a new home”. The reference to home suggests that asylum represents a transitional phase between

This is followed by another heading, “2015 – The Refugee Crisis”. Here we are introduced to new concepts such as asylum laws, asylum regulation, newcomers, people in need of protection, quota refugees. Let’s first deal with “the refugee crisis”. Fleeing is, as we have seen, to be in a state of crisis. One has to move away quickly, flee, from a threat. When the people fleeing become too many there is a crisis, but for whom? In this case, it is not the crisis for the people fleeing that is referred to, but the crisis that has arisen in Sweden. Too many people are fleeing from a threat. The consequence is a range of words such as

However, as we have seen, asylum is a state in which people find themselves, that is, in this case, shelter, safe keeping, refuge or sanctuary, a state which the person has attained after having escaped. After this, it is a matter of deciding who is a genuine refugee and who is not, that is, a person who is not actually fleeing from a concrete threat.

To the term asylum, which means ‘a refuge’, is added a number of qualifications such as laws and rules. The refugees are divided into quotas, but how can this be? Can an escape be measured in degrees? However, this is not what it is about. What is at stake here is dividing the refugees, in a fair manner, among the countries of Europe. Everyone should take their responsibility, but few are willing, while there is talk of newcomers and people in need of protection.

It has to be said that it is interesting to see how it is possible to talk about people without talking about people. One may ask why it is necessary to have such a sprawling flora of terminology to help deal with people who are removing themselves from a threat?

According to the UN there are 65 million refugees. The majority of these people are refugees in their own countries. They are fleeing from civil war, ethnic cleansing, ethnic conflict, religious or political oppression or other forms of violence. And even more people are on the move due to economic reasons.

I wonder what the purpose is of all these concepts, which are becoming evermore strange and convoluted. Is it about order, control, bureaucratic measures, about labels that we need in order to distinguish people from people? Is it perhaps because we don’t want to know? We don’t want to know who this person is. We just want to put a dehumanising label on them so we can keep him or her at a distance, as a refugee, an asylum seeker, a newcomer... Not even in their home in their new homeland is a human being a human being but a newcomer who previously was a refugee, an asylum seeker who has been granted asylum.

What all this adds up to is that we do not regard people as people in their own right, but as people who are displaced, which is underpinned by the fact that we perceive them as having a home in a new homeland, while their old homeland continues to be their real place of domicile, which is a legal term denoting one’s place of residence.

For me, Shared History is about exploring the concept of integration, because integration is considered to be the benchmark of how well displaced people have adapted to their new homeland. But that is not enough because integration means combining two or more elements into an integral whole. In order for this new whole to gain shape, all elements have to give up something. That means that integration also must be understood as a measure of how well a country has adapted to a new situation, that is, how well-functioning the new integral whole is.

Perhaps this is where the crux of the matter lies. All the refugees and displaced people of the world have to be regarded as a symptom of something far more problematic than quotas of refugees, newcomers, displaced people, asylum seekers, a home in a new homeland, order, control bureaucratic measures, that is to say, the lack of integration in the correct meaning of the word. Our world is falling apart and it has to do with identity, national identity, collective identity, political identity, religious identity, regional identity, local identity and, lastly, personal identity. This can be described by the word ‘egology’, that is, that ego as identity is the logical foundation of everything.

This means that national, collective, political, religious, regional or individual identity is made into the foundation and benchmark of everything and consequently for what is right. The wider the abyss between these force fields of identity, in the small as in the large, the larger the risk for nationalism, political and religious oppression, regional and local chauvinism, ethnic conflict. Which makes it more likely that people have to flee.


Johan Hegardt is Associated Professor in Archaeology, Uppsala University. His research concerns museum and heritage studies on a national and international level. Hegardt has also been involved in many large research projects with focus on museum and heritage issues and on historical consciousness. For the time being, Hegardt works as a researcher at Södertörn University with projects involving philosophers, art historians and culture theorists.